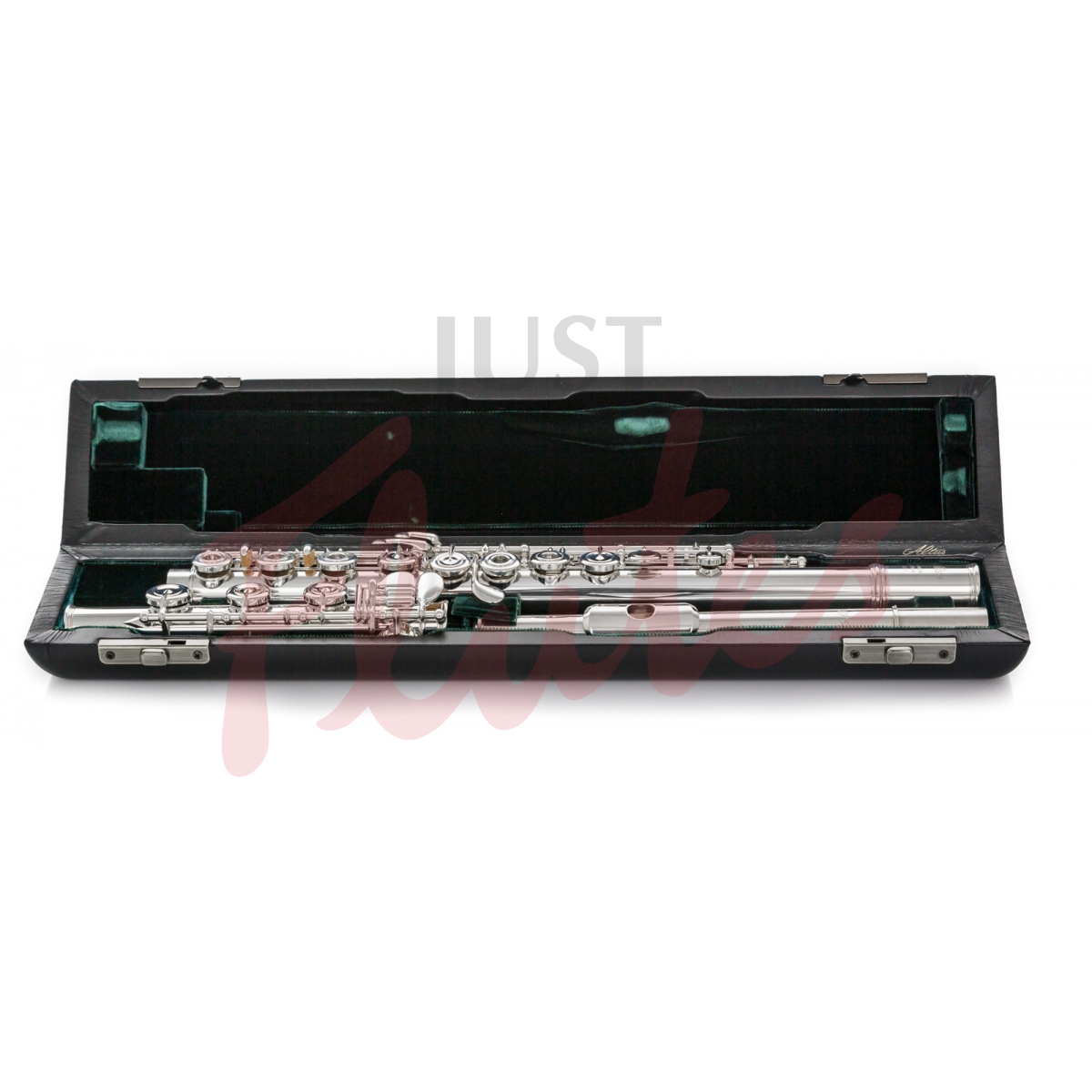 This flute is the lasting result of 30 years of research and fascination with the famed Louis Lot flutes, as well as other vintage French flutes. At last the secret of these fine flutes has been defined with the production of 'Altus Silver™'. This supreme material has the ability to produce expressive effects as excellent as the highly valued older flutes. Consisting of numerous materials and designed with Altus special seaming, this flute once again exemplifies Altus' commitment to create flutes that offer beauty of sound far beyond what is possible with conventional materials.

Unique and outstanding. The 1807 AL ('Altus Limited') is produced from a special alloy which is exclusive to Altus, similar in composition to the materials used by vintage French flute craftsmen (Louis Lot, Bonneville etc). In addition, the headjoint and body tube of the AL are 'seamed': this is the method by which the tubes of historical French flute makers were produced, and results in a distinctive sound. Combining the exclusive metal and seamed tube with state-of-the-art flutemaking results in a mind-blowing instrument, reliable and with that coveted 'vintage flute' sound.

Some thoughts by Michael Cox

"As a student at the Royal College of Music in London my teacher, Sebastian Bell, put an instrument in my hands and said: "Here, this is the sort of instrument you should be playing!" It was a Louis Lot flute. William Bennett helped me to track down one which was available to buy. It turned out to be a flute which had previously been owned by both Peter Lloyd (then principal flute of the London Symphony Orchestra) and before him Jean-Pierre Rampal. Not a bad pedigree I thought! Like most of us, in our search for the perfect match between player and instrument, it started a happy progression through the various Louis Lots I have owned over the years. My oldest was one made as early 1857 but it was my favourite and most recent one which provided me with my first contact with Altus when they helped me to put a new mechanism on a very old and beautiful tube.

The thing about Louis Lot is that, right then, at the very beginnings of the Boehm flute, he produced instruments with an extraordinarily special, complex and colourful core sound, at the same time rich, warm and sweet. A flute sound which I think has never been equalled. Until now that is!

Earlier this year I decided that I needed to buy a flute with a low B, nothing special, just something for occasional use. I trawled through the stock in the London flute shops and took some new flutes out to try out in the Barbican Arts centre where I play a lot of my concerts. All my colleagues were quick and completely unanimous in deciding which one was the one they liked. It was the Altus AL. When I got home I played it to my wife and children, all of whom are musicians, and was surprised to find they could hardly tell the difference between the Altus and my Lot.

Apparently, Mr Tanaka, of Altus Flutes, set about developing a modern instrument that used many of the old techniques used by Lot including a seamed tube. More importantly from research it was discovered that Lot’s atelier prepared their own silver which varied slightly in the proportion of its elements. By taking small samples from several Lots and analysing them they found the metal had a very different make up to the silver that is generally used today. They found 22 separate elements and worked out from their data how best to combine them. Interestingly two of the elements used were found to be so seriously toxic that, fortunately, for the health of Altus' work-force, they were left out. Given that one of the elements was arsenic that was probably a good choice!

The end result for me is that I have unexpectedly and suddenly found the flute of my dreams. The wonderful thing I have discovered is that not only does my new Altus AL have that special Louis Lot sound but it also has more besides. There is an added luminosity to the sound, an impeccable mechanism, a far greater ease through the instrument’s range and, most excitingly creatively, an extraordinary flexibility.

I have a very vocal approach to playing. Like my Lots I find my new flute carries my voice wonderfully faithfully and has a great sung vowel at its core. Unlike the Lots my AL seems to respond incredibly quickly to every thought and emotion I imagine in my song. The day after I picked up my flute from the flute shop we began rehearsals for Ravel’s Daphnis and Chloe. I decided to try out the new flute in the big solo; I thought just for the first rehearsal. I was wrong! I ended up using it for the all the rehearsals, the recorded concert and everything since."

Altus flutes are held in the very highest esteem by professional players and technicians the world over. Founded by master flute maker Shuichi Tanaka, each Altus flute reflects his passion to produce the finest playing flutes available.

Altus models offer discerning flautists a choice of harmonically tuned and elegant sounding instruments capable of consistently executing technical passages with ease. The many possible combinations of options enable the player to exact a wide range of tone colours.

At the leading edge of contemporary flute making, Altus have developed and introduced density-sensitive materials to the flute market, including .958 Britannia. All Altus flutes come as standard with the accurate William Bennett (WIBB) scale, a responsive and durable mechanism, and a precisely hand-cut headjoint, customised for each flute. Altus flutes appeal to the player who has a classical approach to tone and wants a unique flute that is different from conventional offerings.