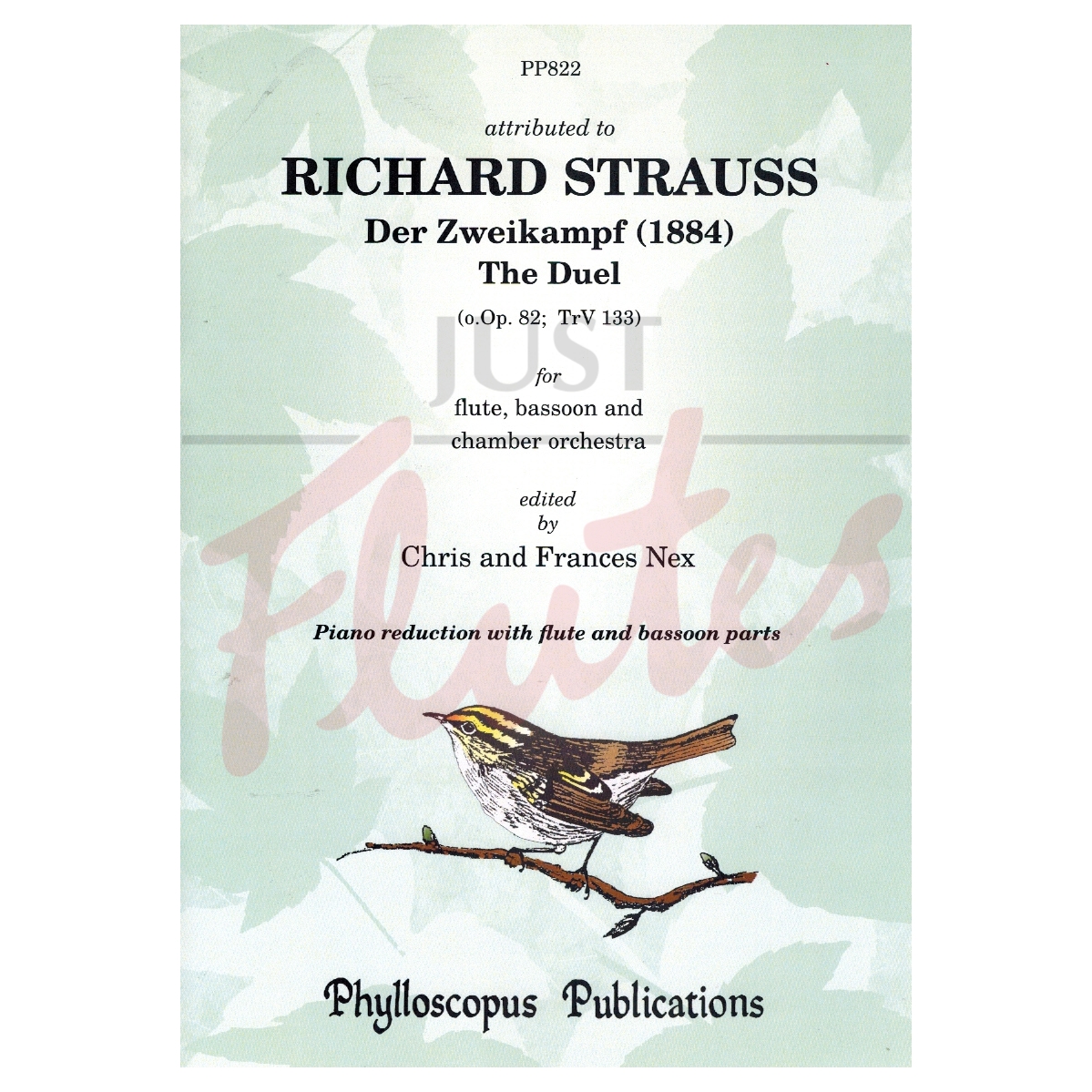 We are grateful to the University of Edinburgh Library Centre for Research Collections for providing us with access to a manuscript of this work. At shelf-mark Mus.M.645 is a set of parts in the hand of an unknown copyist, annotated by John Parr (the bassoonist of Sheffield), who also wrote a full score and second copies of the bassoon and bass parts. The score is dated 1930 and the bassoon part 1934. It is here entitled merely 'duet for flute and bassoon with orchestra', and ascribed to R. Strauss.   We are also grateful for advice from Dr Christian Wolf of the Richard-Strauss-Institut in Munich, who have access to a copy of  'der Zweikampf' made by Cl. Schubert, but the Richard-Strauss-Archiv in Garmisch-Partenkirchen will not permit them to make a complete copy for us, but has permitted sample pages to be copied, confirming the identity of the music. They also affirm the considerable doubt as to Richard Strauss being the composer, however no other composer has been suggested in his stead.  In the Strauss bibliography, a date of composition of 1884 is given, when he was twenty years old.   We would also like to acknowledge with thanks the help of Drs Jenny Nex and Lance Whitehead of Edinburgh in deciphering the manuscript and advising on the piano reduction.   In editing the work we have corrected a few evident errors and made the dynamics consistent. There was no given tempo indication in some of the parts, but Parr added 'allegro moderato', which is also the tempo indication in the Munich manuscript.  He also suggested the bass pizzicato in most of the polacca, but perhaps this was intended only for the double bass, should one be present. There are some discrepancies between the Edinburgh score and parts which we have resolved somewhat arbitrarily on musical grounds.  The differences between the Munich and Edinburgh versions are mostly small as far as we can discern; the trumpets are in F in the former, but in B flat in the latter; the dance is entitled the French 'Polonaise' in the former, but the Italian 'Polacca' in the latter.  A larger difference is that the flute is tacet in at least the first four bars of the trio of the Munich score. The Edinburgh copy of the flute part at this point has an almost obliterated section consisting of eight bars rest, followed by eight bars in octaves with the bassoon; the complete trio then follows immediately without further amendment. In the Parr score the first eleven bars of the trio were written as in the obliterated section, but then overwritten with the later version.  This seems to us to indicate that the score and parts were written in conjunction with each other.  In this edition both versions are printed in the flute part, but we recommend using the elaborate version only on the second occurrence of the material.   It is also playable by flute, bassoon and string quartet, as the brass and timpani parts of the original orchestration, while adding a great deal of colour, do not add to the harmony.  The few places where the trombone part is significant have been cued into the cello part.