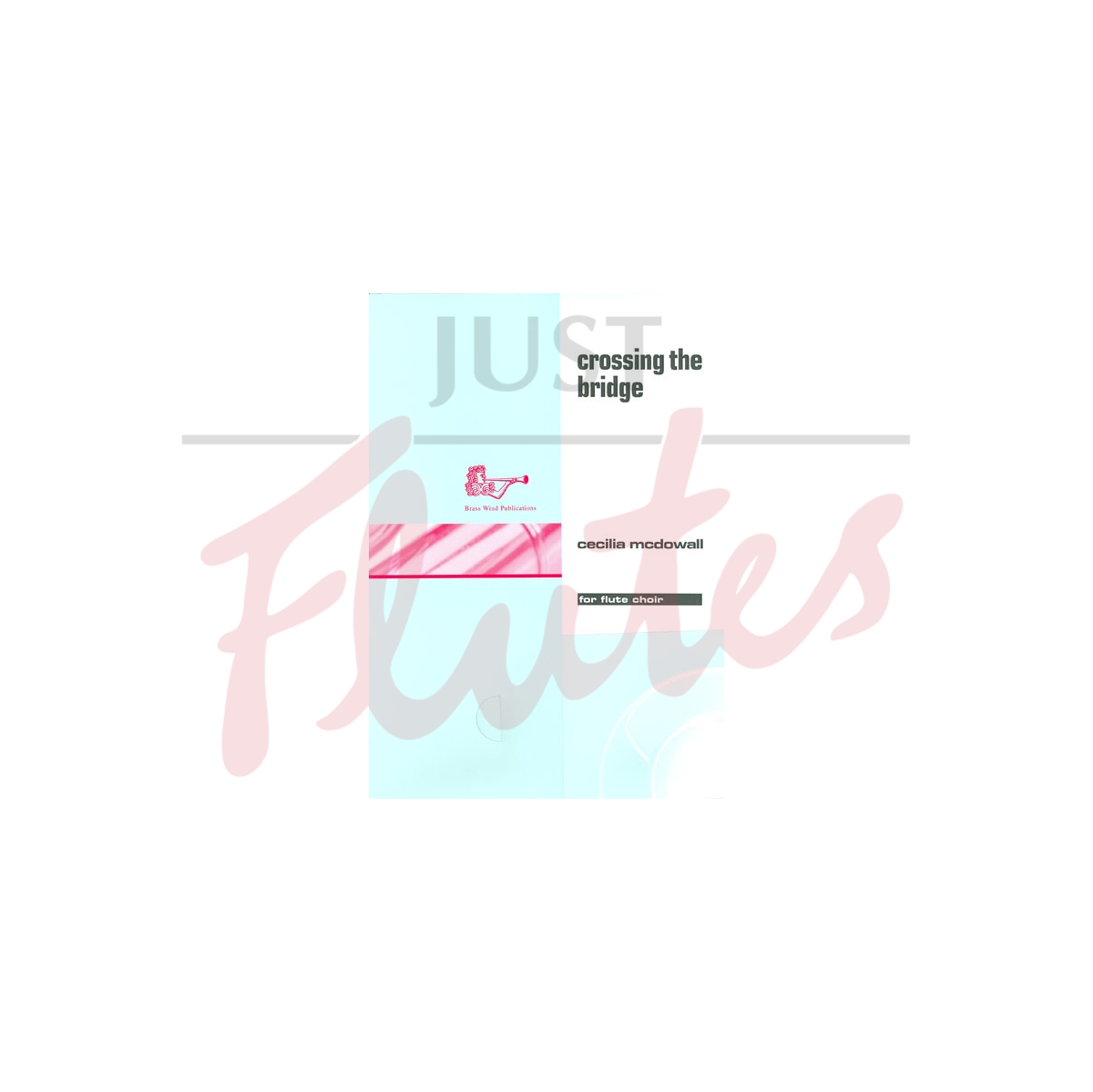 This is an excellently crafted and substantial work for flute choir, the first performance of which was given by the massed forces of the Briminghmam Flute Orchestra. It also works well one to a part though, and its intricate nature is a little easier to put together than it may first appear. There's always another part the same as yours somewhere!  Mostar weaves a spell with those enigmatic Eastern European folk harmonies, London Bridge is a shorter connecting movement which hints at swing, and Brooklyn Bridge is technically challenging with its changing metre and strong rhythms. The outer movements stand alone which is always very useful. An imaginative work like this is a joy - embrace it and you will not be disappointed!

Crossing the Bridge is a work for flute choir in three movements which are all to do with different bridges: Mostar, London Bridge and Brooklyn Bridge. Each movement captures a different quality – Mostar, with its middle European folk feel and falling phrases; London Bridge, a playful, fragmented presentation of the well known, London bridge is falling down; and Brooklyn Bridge, an energetic, high octane work, bringing the whole work of 11 minutes to an upbeat finish. The title, Crossing the Bridge, comes from a Haiku by the Scottish poet Alan Spence:

Crossing the bridge -
the other side
is lost in mist.

The work was commissioned by the National Flute Orchestra with financial support from the Birmingham Flute Commission, the British Flute Society, the Birmingham Flute Choir and Phoenix Flutes (Didcot) and individual sponsors. The first performance was given by the National Flute Orchestra, conductor Kenneth Bell, on 27 February 2011 at the Birmingham Conservatoire, England. The work is dedicated to four of the leading flautists and teachers who had a great impact on British flute playing in the twentieth century - Geoffrey Gilbert, Gareth Morris, John Francis and Harold Clarke (Cecilia's father).

“The structure of the work is like that of a bridge. The short middle movement, London Bridge, spans the divide by taking the last phrase of Mostaras its opening, exploring the darker tones of the lower instruments, and the first bar of Brooklyn Bridge as its close. In this middle movement I took the old English song, London bridge is falling down, and played around with it, sharing it between the instruments, until it ‘falls down’.  The opening movement, Mostar, refers to the old single arch stone bridge in Mostar, Bosnia and Herzegovina, which became such a symbol of peace and hope in the late 1990’s. In the outer sections of this movement the flutes explore the characteristic ‘fall’ at the end of the phrase which is quite a feature of some middle European music. The central section is lively and has a whirling, folk-dance feel to it. At the time Brooklyn Bridge was built (1883) it was one of the longest suspension bridges in the world. It connects Manhattan with Brooklyn across the East River, always busy with traffic, and has a powerful presence on the New York skyline. The third movement of Crossing the Bridge is one of perpetual motion, opening with a bright, staccato texture, and is in the shape of a palindrome or arch. (Appropriate, I hope, for a piece about bridges!) It is restless and energetic, driving full speed to its final cut off.” - Cecilia McDowall